No place like home: The benefits of aging in place

According to an AARP survey, three-quarters of Americans age 50 and older indicated they prefer to remain in their current residence or community for as long as possible as opposed to a senior care facility. The preference among older adults to remain in familiar homes and communities is termed “aging in place.”

The desire to age in place in the sanctuary and security of one’s own home is growing just as quickly as the “silver tsunami” itself. Beyond simply being a personal preference for a growing number of aging adults, aging in place has many concrete benefits. Evidence suggests there are cost-savings attributed to aging in place in comparison to the expense of a nursing home facility or institutional care facility. One key benefit of aging in place is that it offers aging adults greater independence and tends to improve their quality of life.

On a systematic scale, aging in place can create cost savings to Medicare and Medicaid programs, which can mean the opportunity to spread limited resources to a larger population of eligible seniors within these federally sponsored programs.

The ability to age at home is becoming more efficient, less expensive, and more attainable for many individuals.[2],[3] By 2030, 7 out of 10 Americans will require long-term care at some point in their lives.[4] The COVID-19 pandemic shed light on a government infrastructure that struggles to support seniors even as greater capacity is needed. As the aging adult population grows, states and communities are looking to provide timely in-home interventions to delay or completely avoid institutionalization.

Following the flurry of stay-at-home and shelter-in-place orders in response to spreading COVID-19 risks, the magnitude of social isolation came to the forefront, becoming a topic of national conversation. According to the CDC, in June 2020, 40% of adults experienced issues with mental health associated with the pandemic. That number swelled to 63% for adults age 18-24.[5]

The nation’s broad-reaching encounter with social isolation and depression provided a window into the lives of millions of aging adults who had for years prior to the pandemic experienced the heavy emotional toll of loneliness. It unveiled a grim reality of what many aging adults face in America.

With an estimated 24% of older Americans considered “socially isolated” (pre-COVID), the government spends $6.7 billion in additional Medicare dollars on healthcare costs associated with social isolation.[6][7] According to the AARP, social isolation has been associated with an approximately 50% increased risk of developing dementia and 32% increased risk of stroke among older adults.[8] The government should and can address loneliness in the same way it responds to other public health issues: with robust programs to mitigate its impacts and offset its costs. 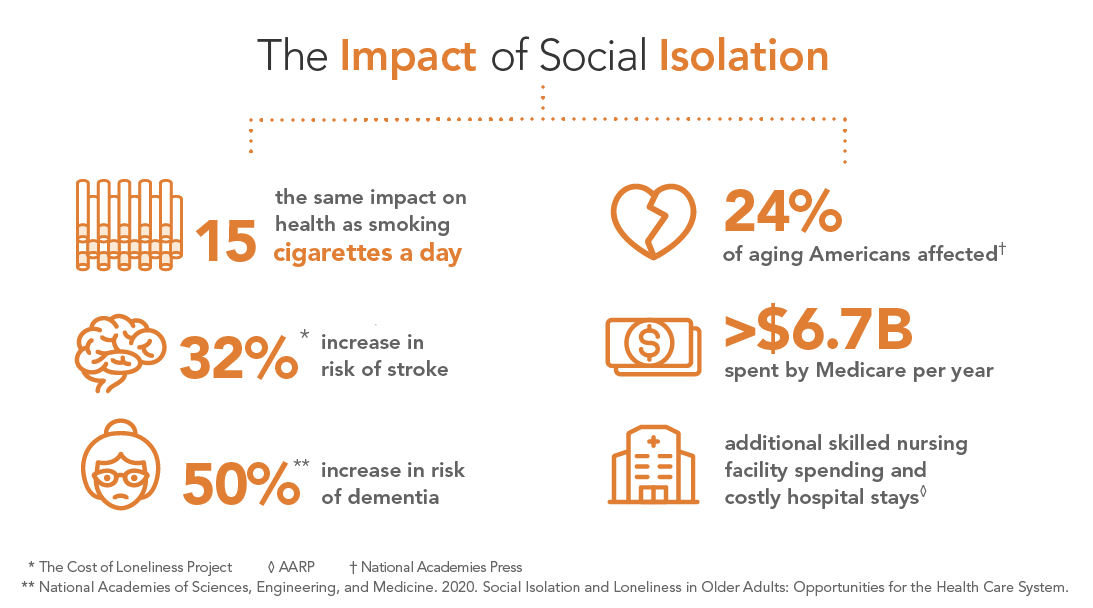 The financial weight of long-term care

The cost of long-term care is rising faster than the rate of inflation. These costs continue to rise with increased demand, changes in Medicare and Medicaid coverage, and increases in operational expenses. Long-term care programs cost the federal, state, and local governments $129 billion each year.[9] Nursing homes, which cost states $41 billion per year, often act as a last-resort government intervention for seniors who have already severely deteriorated in health and need continued government support.[10]

Existing home-based and community services (HBCS) programs cost states $76 billion a year and serve as exclusive and expensive solutions to nursing home diversion efforts. HBCS programs are offered to eligible individuals to offset the looming cost of nursing homes, which averages $89,297 – $100,375.[11] However, for many on Medicaid, there still exists the state’s overreliance on nursing home facilities and its slow strides towards making long-term investments in aging-in-place solutions.

Although programs exist along the aging continuum to defer people from nursing homes, too few interventions exist in the home, during the initial aging-in-place process. There is an opportunity to target those individuals who do not qualify for HBCS waivers, and provide them with a low-cost, at-home intervention before they experience “enough” health decline to qualify for waivers or institutional care.

This group could begin the aging-in-place process and potentially avoid unnecessary hospitalizations or rapid deterioration. The government must build a durable infrastructure that expands across the entire timeline of aging to reduce the heavy impacts and costs accrued by late interventions.

Long-term benefits with a light touch

Extending support systems to older adults do not have to involve major interventions or a reinvention of existing care models. These programs can be simple, targeted, and efficient for both the individual and the state. With innovative, light-touch interventions started early on, there is an opportunity to help American seniors remain at home, offset caregiver burdens, and provide cost savings to government.

Lucia Gayley works towards driving health-related equity and opportunities to expand Maximus’ positive impact on communities across the globe.

The global health challenges of an aging population

The increased importance of long-term care as our population ages