Count everyone once, in the right place, at the right time

Every ten years, the United States conducts a Census. The 2020 Decennial Census was historic and unique. For the first time, there were four ways to respond to the Census questionnaire:

The Census Questionnaire Assistance program (CQA) was launched to be one of the modes of self-response in the overall effort to collect Decennial Census demographic data from 143 million households via a 10-question form. The CQA program involves taking millions of inbound telephone calls to answer the public’s questions about the Census form and entering the responses that a person provides and submitting the questionnaire on their behalf. CQA also has an outbound call campaign to improve the accuracy of questionnaires submitted.

In no small part, the success of the Decennial Census relies on the public’s trust with sharing their personal data with the government and their confidence that their data is safe.

The Decennial Census is always a complex operation of enormous import. This Census was far more so as it happened amidst the pandemic. Census stakeholders and workers pivoted quickly to ensure safety, trust, and mission success in delivering the count that is the foundation for Congressional apportionment and aid for vital programs such as education, health care, and transportation. Maximus’ CQA delivery and adaption to this challenge was deemed a model by the US Census Bureau.

We delivered human and next-generation technology assistance to callers and managed all activities and technology required to design, test, install, and operate contact centers for CQA.

How we did it

Secure data collection and transmission, under a FedRAMP-authorized environment, involved recruiting native speakers in 14 languages for 11worksites with a total of more than 10,000 staff ─ and an even larger pipeline of qualified applicants to maintain staffing levels required to meet service level agreements for the entirety of the operational period of performance. Those languages were: English, Spanish, Cantonese, Mandarin, Japanese, Vietnamese, Korean, Arabic, Russian, Tagalog, Polish, French, Haitian-Creole, and Portuguese. 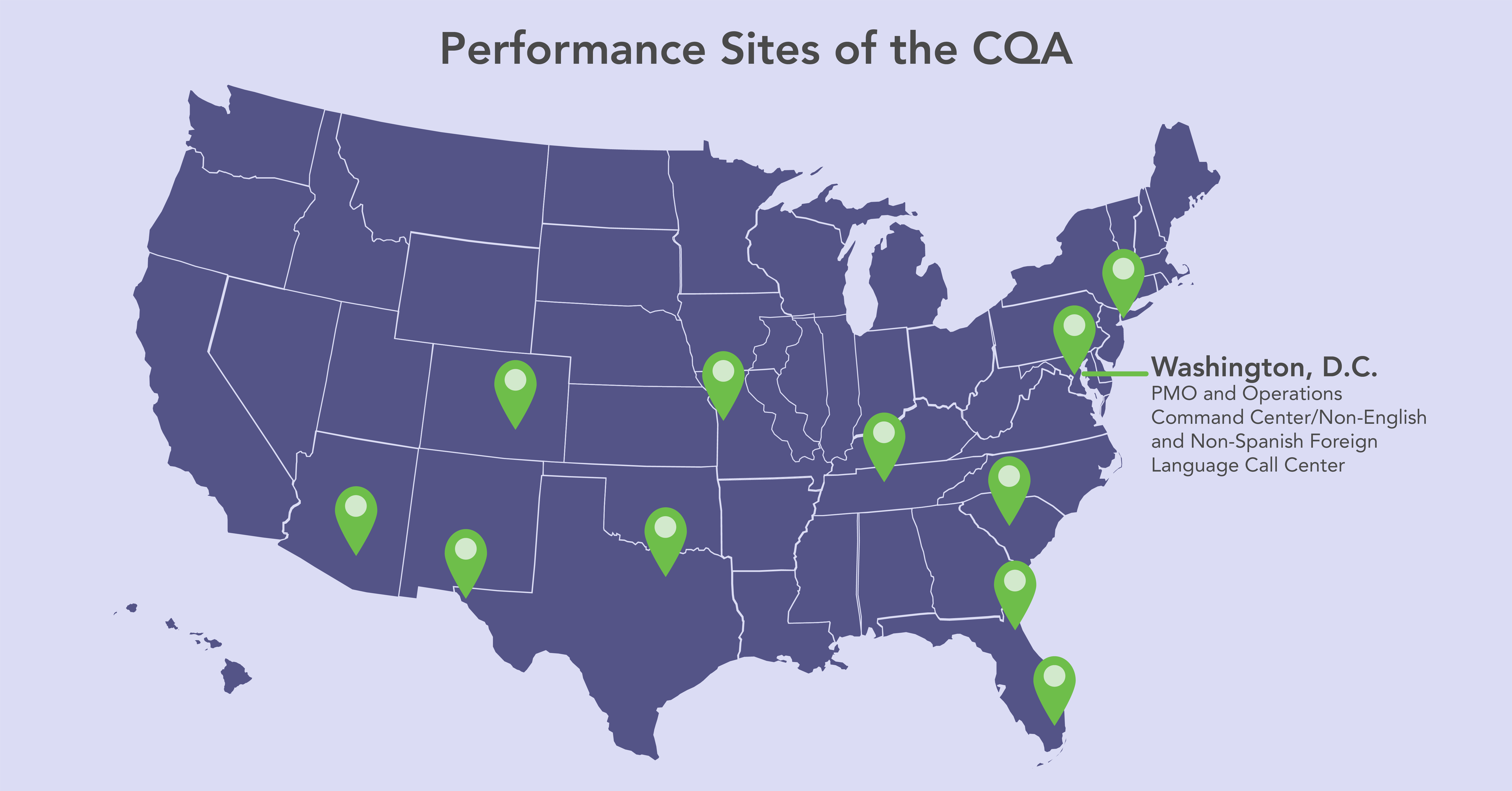 We had a clear understanding of the mission and the work that enabled us to execute two crucial tests as part of the Census Bureau’s national surveys in 2017 and 2018 to prepare for the 2020 Census. Our work in these tests demonstrated both preparedness and adaptability and resulted in top notch CPARs for our CQA delivery. In the run-up to the CQA 2020 Decennial Census operation, Maximus tested in microcosm all the aspects of our operation, including performance and resiliency, stress, and volume on both the call technology and the staff. 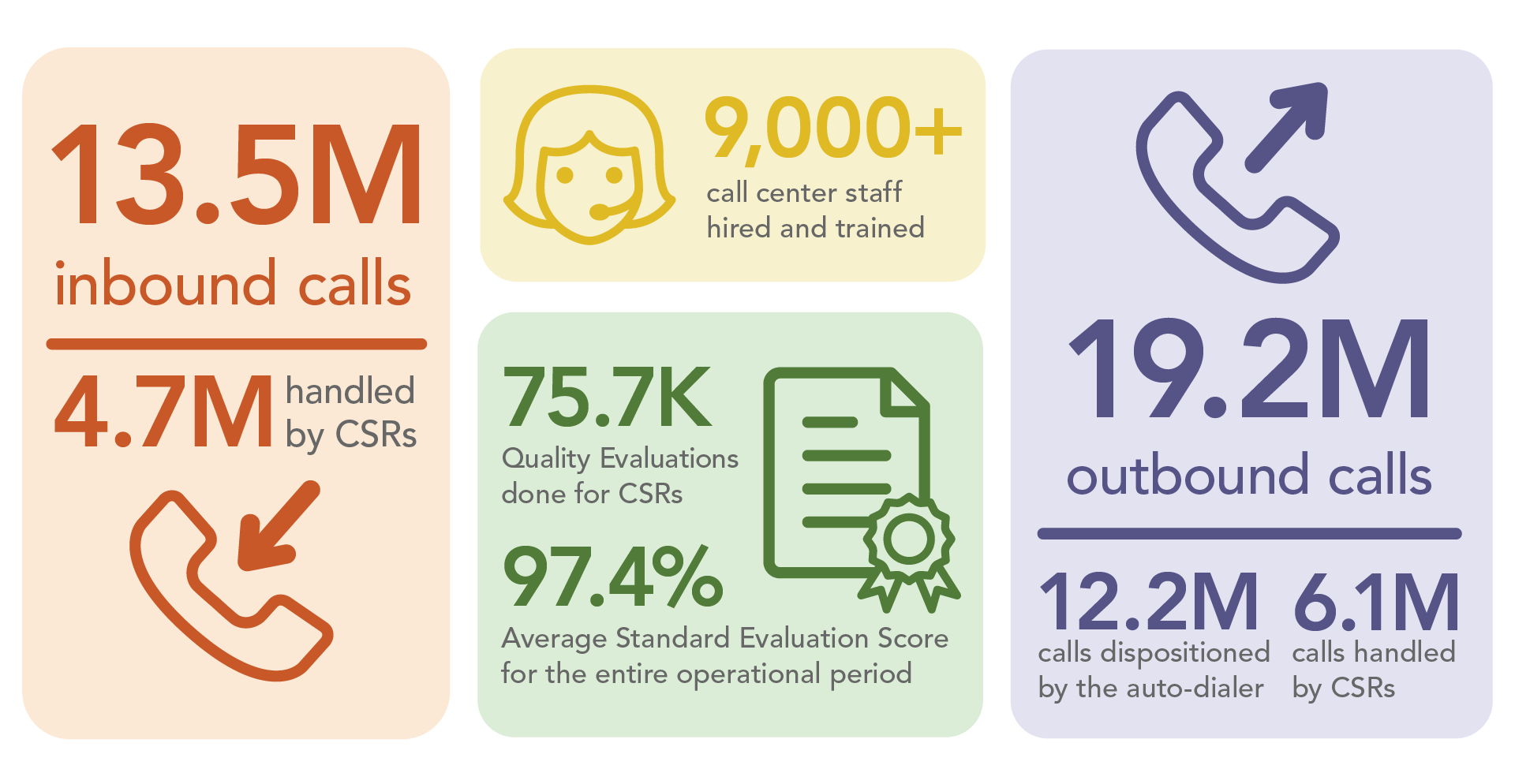 The end results of Maximus’ delivery of CQA for the United States Census Bureau is that we took millions upon millions of inbound calls and enumerated more than half of the calls where an agent assisted the caller; this was well more than twice the client expectation. Our delivery on the mission is reflected in our formal contractual evaluations, award fee scores, and CPARs, as well as Letters of Appreciation issued by the Census Bureau to CQA Key Personnel.